“I get the most out of how excited the community is about this work.” says Emily Jubenvill, Manager of the North Shore Neighbourhood House’s Edible Garden Project.  “We’re reaching deeper into the community and finding new ways to get people involved.”

Given that there was almost no food security work taking place on the North Shore almost ten years ago, it’s remarkable to see the community support and the innovative and dignified models for accessing food that now exist.

The seeds of the Edible Garden Project were sown in 2005.  An environmental scan conducted that year identified several food security issues.  In particular, many people did not have access to fresh fruits and vegetables and many wanted to learn more food skills.  A pilot project was launched to share backyards as food growing spaces and to encourage food donations from all gardens.
Community members thought the idea was great, but few were donating.  Most didn’t know how to grow food.
Thus began a mentorship model using demonstration gardens in backyards, partly funded through the Community Food Action Initiative.
One experienced lead gardener was partnered with keen learners and this volunteer team was responsible for all of the day to day operations.  As a result, they learned quickly. “It’s a more empowering experience for them because they’re given that responsibility” Jubenvill says. “They have a lot of ownership and pride over the gardens that they work with.”
With staff no longer required to do daily watering and other ongoing maintenance at multiple properties, the initiative expanded significantly.  Now, almost ten years later, this Sharing Garden model is well-established in North Vancouver and grows food across a half acre, divided in plots of land across the city.
All of the produce grown is donated to local organizations each week: the Sage Women’s Transition House, the Harvest Project, the Turning Point Recovery Centre, and the Greater Vancouver Food Bank.  Ensuring there is produce available for a weekly donation adds another layer of complexity to the task of growing food. The volunteers learn to organize their planting schedule to ensure they will have ‘sales’ each week and to maximize their harvest.
The Edible Garden Project has also partnered with the Greater Vancouver Food Bank to pilot a project where they sell their produce at reasonable prices to customers at the food bank depot.
Whether through these direct sales at the food bank or through donations of top quality, locally grown produce to community agencies, the Edible Garden Project brings dignity in how community members learn about and access food.
Over the years, Edible Garden Project’s portfolio has steadily expanded from growing in backyards to hands-on learning in community gardens, elementary and secondary school gardens, and a social enterprise farm with farm gate sales.
As a result of all of their initiatives, the Edible Garden Project has connected diverse communities and reduced isolation.  “We see a vastly wide array of political perspective, socioeconomic backgrounds, cultural backgrounds, and ages.  Everyone gets along and cares about each other because they care about food or they came because they were interested in food and learning.” says Jubenvill.  “It’s about harnessing the power of food as a connector to bring people together.”
Food access, food skills and community connectedness – these are just three of the successes of the Edible Garden Project as they work towards one of their dreams where
‘everyone should have the opportunity to fall in love with fresh picked produce’. 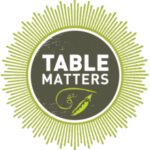